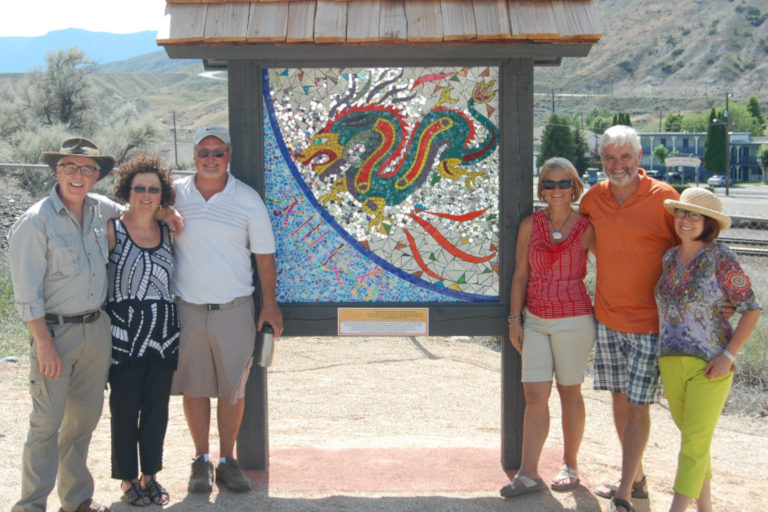 Volunteers with the Chinese Dragon Mosiac 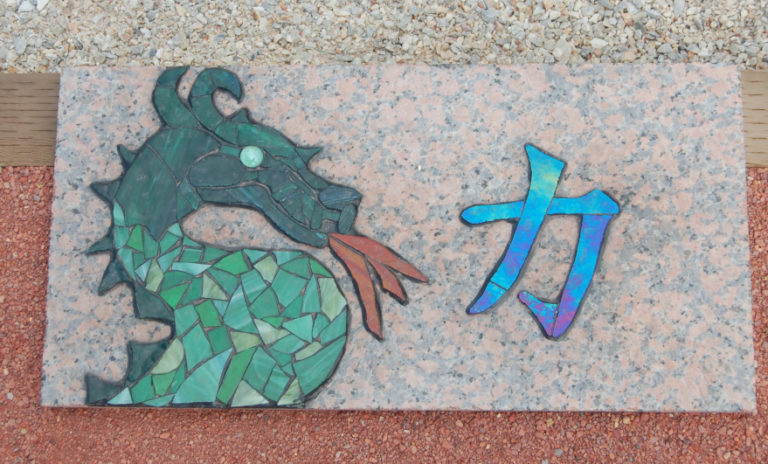 Example of a Head Stone placed by Ashcroft Residents

The Chinese cemetery was developed by the CPR over 100 years ago with 49 visible grave sites.  (7 that have original headstones).  The first internment took place, probably in the late 1800’s and the original headstones that are still there are dated in the 1940’s- 1960’s. The first Chinese burial in the public cemetery (end of Railway) seems to have taken place in the early 1940’s. Prior to that all Chinese seem to be buried in the cemetery, or their bodies shipped back to China. Some were also probably exhumed and sent back to China, a custom that was practiced at the time.

In 2005 the Ashcroft/Cache Creek Rotary and Ashcroft and District Lions took on the task of cleaning the graveyard up.   They had many meetings and would also meet to pull weeds, rake, etc. In 2007 many loads of white gravel were donated, the trucks hauling the gravel were also donated as well as a small loader to use in moving the gravel to where they wanted it to be put.

In 2007 the Consul General of the People’s Republic of  China, in Vancouver, H.E. Qiang Yang visited Ashcroft and took a tour of the Cemetery with representatives of the Rotary and Lions Club.

In 2012 a stone marker was placed in the cemetery, dedicated to “The Memory of the Chinese workers who helped build the Canadian Pacific Railway in British Columbia.” A memory board was erected beside the site, with pictures of, and information about, the Chinese community in Ashcroft.

A glass mosaic of a dragon created by Marina Papais was installed in 2016 as well as a bench with a glass mosaic back this was also created by Marina with funds coming from the Charles Chow family- a family that had been coming to Ashcroft for 40 years to visit their grandfathers grave site. Also many head stones were created and put on each grave site. (Many others helped with the installation of the mosaics and the creation of the headstones.)

In 2017 the alter was unveiled, the alter was created through consultations between the Lions Club and the  Rotary, and Marina Papais and husband Daniel Collet were also behind the design of the alter and the etchings. The alter contains a plaque that acknowledges the apology made by the BC government for the hardship and suffering that was imposed on the Chinese community.